Welcome to the John Carrell Jenkins Council of the Knights of Columbus!  We are affiliated with the St. John the Baptist Roman Catholic Church in Front Royal, Virginia.

We’re a group of Catholic men dedicated to Charity, Unity, Fraternity, and Patriotism.  We support our priests, our parish, our community, our families, and each other through a variety of programs.  If you’re a man over 18 years old, we encourage you to join us! 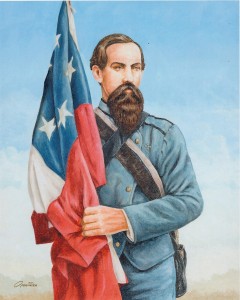 St. John the Baptist Catholic Church, located at the corner of West Main Street and Luray Avenue, stands as a memorial to John Carrell Jenkins, a Maryland soldier and graduate of Mount St. Mary’s prep school, who died for the Confederacy and whose family gave the initial sum of money which made possible the erection of the Church. Young Jenkins was one of three brothers who enlisted in the Southern Confederacy.

The Jenkins family not only paid for the construction of St. John’s Church, but donated its altar, bell, pews, sanctuary lamp, vestments, and sacred vessels.  A marble tablet on the east wall of the Church reads: “Pray for the Soul of John Carrell Jenkins – Died October 11, 1861 – Out of Whose Means Principally – This Church Has Been Erected.”

John Carrell Jenkins was born on June 14, 1834 and was 27 years old when he joined the tide of Southern sympathizers fleeing Maryland to join the Confederacy.  He was inducted at Camp Lee, VA in June 1861 and assigned to Capt. J. Lyle Clark’s company, Gilham’s Campaign.  Marked by brief skirmishes and incessant rain, there was an outbreak of measles among the ranks of country soldiers leaving the town boys on duty.  The regiment had established camp in the valley mountains of Pocahontas County, where soon fatigue and privation of doing double duty began to tell on the town boys and an outbreak of camp fever and dysentery added more names to the sick list.  On September 21, John Carrell Jenkins fell ill with fever later diagnosed as typhoid.  With an enemy attack imminent, the sick and wounded were transported to Warm Springs, VA on October 1.  On October 11, 1861, John Carrell Jenkins died in Warm Springs, VA.  His body was taken to Richmond for burial.  Bishop McGill conducted the funeral at the Cathedral.  Interment followed in its private cemetery.  At the end of the war his grieving father came to remove the remains to their final resting place in the family vault in Baltimore, MD.

It was the desire of the Jenkins family that a church be erected near the place where John Carrell Jenkins had died, but they were persuaded that there was a greater need for a church in the Shenandoah Valley.  Front Royal was chosen as the site of the memorial, where there was already a number of Catholics.